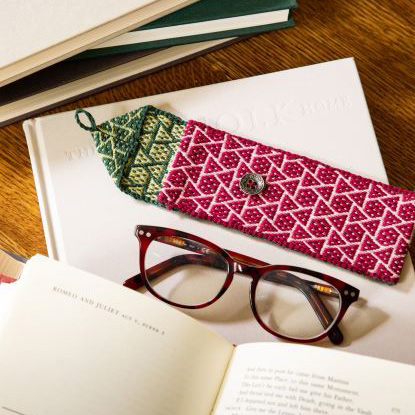 For the magazine WEVEN of Weefnetwerk I interviewed Barbara Goudsmit, who was well known for her publications in Easy Weaving with Little Looms. Because I wanted to use a photo from that publication, I contacted the editor. She indicated that she would like to publish more articles about tablet weaving, so could I contribute??

Of course I was interested, so I checked out the website to see what contributing to the magazine involved. It works with a call: you can submit projects and a selection committee determines whether your idea is fit for publication. But that’s not all: you have to work within a certain theme and you get a color scheme. And the deadline for submission is about a year before the magazine actually appears….

For the winter issue of 2022, I still had two weeks submit a proposal within the theme “Winter Reading”. It was on a short notice, but the idea was there: a glasses case in a pebble double weave. However, I didn’t know whether it would work out: theoretically it should be possible, but was my theory correct?

So time to do some sampling: luckily I had the right colours at home. In a somewhat thicker material and for tiny reading glasses, because it had to be done quickly. And it worked! With some flaws, which I neatly hid under the reading glasses in the photos, I sent my proposal for “A tablet woven glasses case” to the editors. Two weeks later I received an email: selected!!

And then the work begins: writing the article in the right format. Weaving again, because I had to send the glasses case to the magazine (and I didn’t want mistakes in that piece!). But the most nerve-racking part wasthe postal service: it took 6 weeks for the glasses case to arrive in America…

After that it became more and more fun: I sent a glasses case by post and a Word document with plain text by e-mail and received a very nicely formatted article as a pre-print. No photos yet, but my illustrations were already  great! And this week the issue of Little Looms appeared, showing off the full article with beautiful pictures. And in which my “tablet woven glasses case” has been transformed into “A spectacular spectacle pouch”. 🙂

You can order the Winter Issue of Little Looms here:
https://shop.longthreadmedia.com/

1 thought on “A publication in Little Looms!”