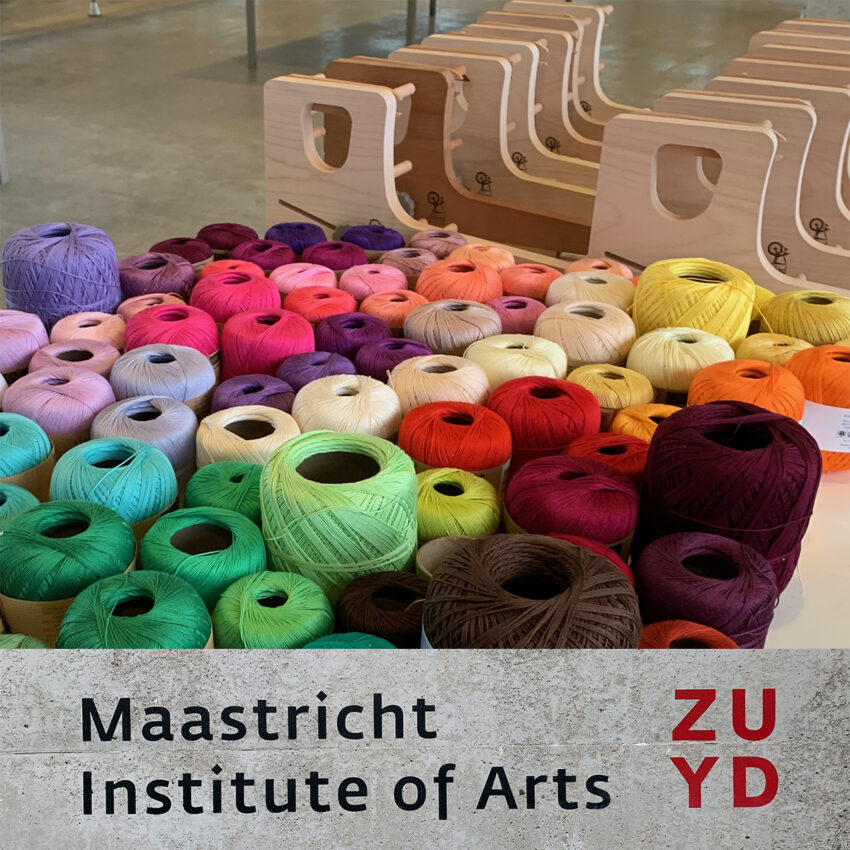 Mid-January Willemien Ippel of Crafts Council Nederland texted “Do you have time to teach at the Maastricht Art Institute for 3 days in April?” Art Institute? Me? A bit overwhelmed and after checking whether I could take holidays I first said yes and then asked Willemien if she could tell me more. It was a project week in the last week of April in which the first-year students could choose from four workshops, one of which was band weaving. So I had the opportunity to work with young, creative people. And it was King’s day during that week and the King came to Maastricht.

In the course of time more information followed: who the other teachers were, that we were in a hotel at the place where the King would end his tour, that 14 (Fourteen!) students had chosen my workshop and that we had to draw up a lesson program in which there was also plenty of room for the students’ own creativity and experiments. I was looking forward to it but at the same time was nervous, because 14 19/20 year old art academy students is a very different audience than I usually have in my classes.

Now it’s already over: the week has passed incredibly fast and I enjoyed it a lot! I met nice guest fellow teachers in Amandine David, Evey Kwong and Jeanny Bouwen and we got a very walm welcome from the programme management of the art academy and Willemien herself. But the most important thing: the extremely motivated, enthusiastic and nice group of 12 girls. They worked diligent and obtained very good results with band weaving on day 1, tablet weaving on day 2 and the crossed warp technique on day 3. It is very nice to see how this generation is aware of material waste and sustainability and how this was a topic of conversation: not a single bit of a warp was thrown away, but was either carefully rolled up or taken home for use. The creativity was also inspiring: a number of students started experimenting with making patterns with the weft thread and that gave surprisingly nice results! But for me the most special thing was the student who came up to me afterwards and said: “Thank you for your workshops, this week has meant a lot to me. I finally found something with which I can relax and that is very important to me.” I will definitely continue weaving and I have already bought an inkle loom.” Special because she pronounced it that way, special because I was able to make a very small difference and special because it is so recognizable to me. Touched, I still enjoy an evening in Maastricht before going home.