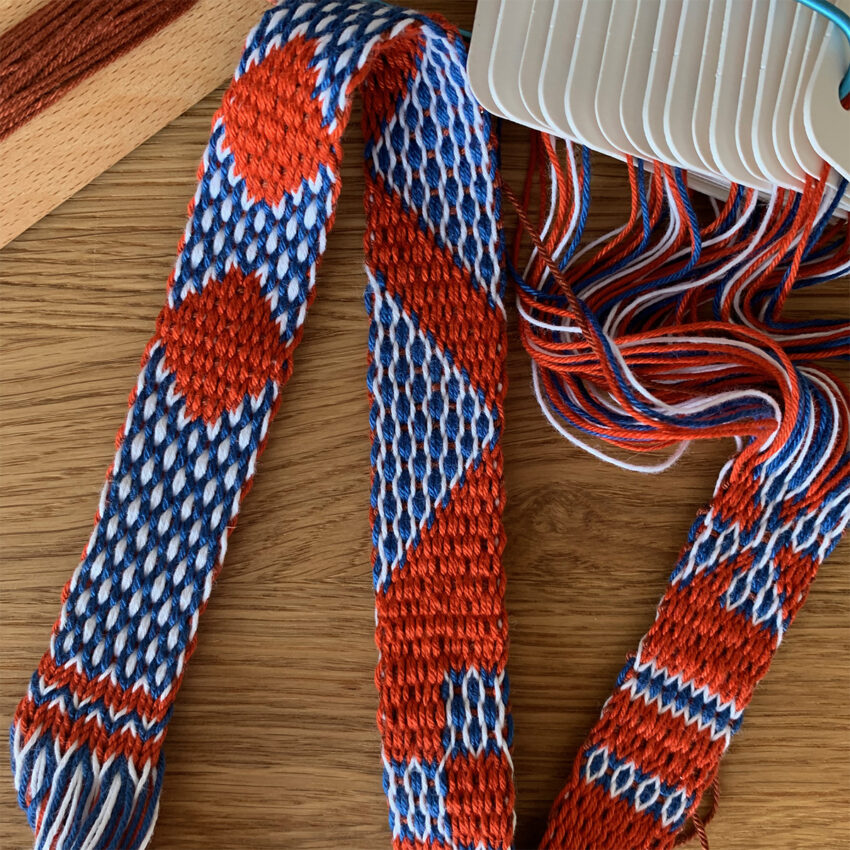 A day after the Braids conference 2022 in Svendborg, Denmark, I am typing this blog fairly exhausted, but full of new knowledge and inspiration. What a great week!!! A meeting with many of my tablet weaving heroes and other well-known yarn lovers. A week full of lectures and workshops, in which I learned so much. But not only during workshops and lectures, but also during breakfast, lunch and dinner. A week in which I concluded that I can compete with my own tablet weaving heroes, but at the same time I realised that I still know very little. A week of which I would like to have many more.

It’s all too much to put in one single blog. But actually the whole week can be summed up in this band. The technique of the band is the Mamasa technique, learned from Keiko Kusakabe en Takako Suzuki. The process was already interesting, because spoken language turned out to be unimportant. It was sometimes difficult to distinguish where the Japanese conversation ended and English started and vice versa. But that didn’t matter: the demonstrations were perfect and everyone helped each other, so we all had woven a piece by the end of the day.

The next day I attended a workshop in finishing Sami bands by Anna Ciucka Sjursen. What knowledge and skills she has! I really wanted to learn one specific finishing technique and you could ask what you liked to learn, so I took the opportunity. And it turned out to be really simple…

In the few free hours (and actually mainly between 6 and 8.30 in the morning) I finished the band, because Friday I wanted to show it at the pop-up exhibition of the samples everyone had made during the week. This band represents to me what Braids 2022 has been: the interaction with other weavers and braiders, the transfer of knowledge, the exchange of cultures. And you can’t express that better than in a red-white-blue band wovenby a Dutchy in Denmark, using an Indonesian technique taught by two Japanese and finished like the Sami do.

At the end of the workshop

Results from workshops I followed

Travelling by train for 10 hours

A loom wanted to join me to Baarn …