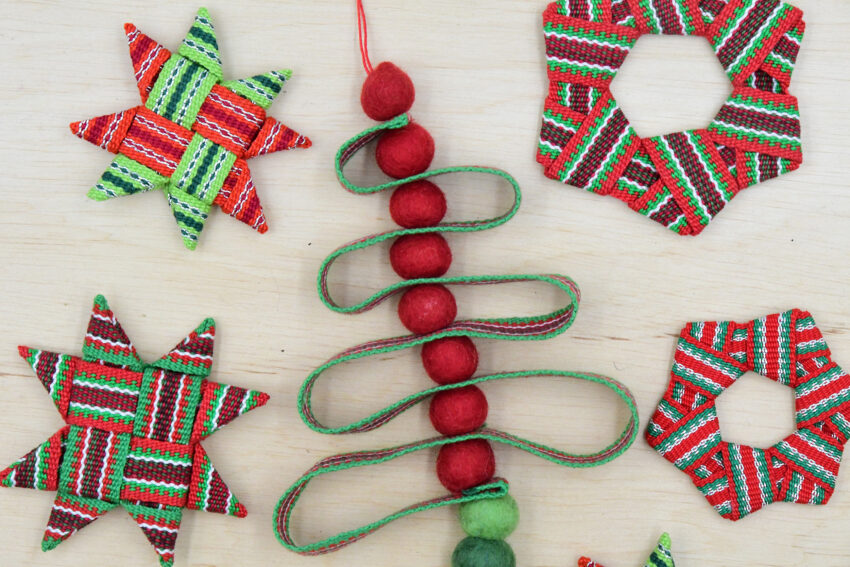 For years I had been a member of pop choir Voicemail in Voorschoten. I especially liked to sing all the Christmas carols. My absolute favorite was “In a cold Night”, closely followed by “Christmas all year round”. The latter is really a song that lingers in your head.

And that’s what happened last year: Christmas all year round… Already in June I made plans for a Christmas workshop with Creahuys 41 and the Weefcollectief Fryslân. Making a small and simple band and then turn it into Christmas decorations.

So I started preparing the workshops already in summer: writing the tutorial, making pictures. All very much at ease, since I had plenty of time. Then I realised that for a Christmas decoration you need about 50 cm of band. Almost all participants were beginners and you cannot expect them to warp an inkle loom and weave 50 cm. So during the workshop they could make a Christmas tree, but not a Christmas wreath. So I decided to weave bands for all the participants.

So at the end of November I was a bit fed up with Christmas. I wove 24 bands in green, red, white and sparkle yarn. I had another idea for the left overs of those bands, but I couldn’t bring myself to work on it.

Then the workshops took place: the atmosphere was great, everyone had a lot of fun and that inspired me to work on the left-over-project. So yesterday I, just one day before Christmas Eve, I actually started! A peaceful afternoon later the result was there.

So this year, we have enough Christmas decorations. Now two more days of spending time with family and then Christmas is over after seven months of preparations. And I really hope that I can get rid off that lingering Christmas carol…. 😉

Today I went to @studiohoptilburg with the first 6