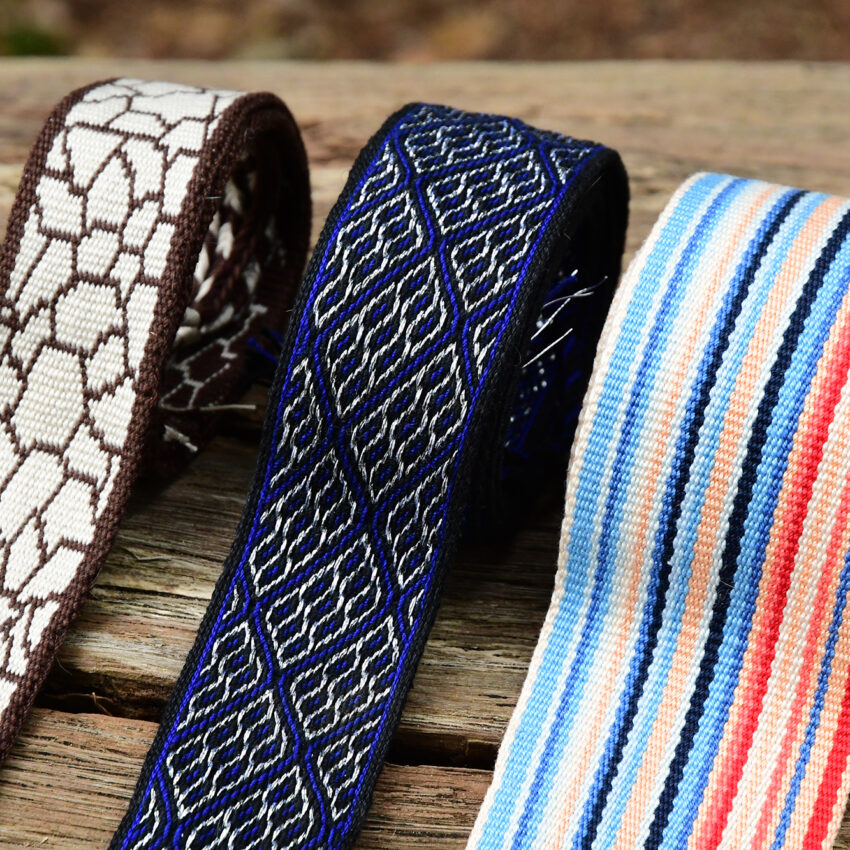 Just like many other people I’m seriously concerned about the climate change: temperature reaches record highs, forest fires, floods, dryness… The most scary thing is; you really see it happening and there are no short-term solutions. Reason for me to think about how I can cope with climate change, since we have to find a way to live with it, but as an individual; there is not that much you can do. Of course you can live responsibly, but you cannot change it on your own.

So for me one way to cope with climate change is to draw the attention to this theme through my bands. Next week, Weefnetwerk organises an exhibition where I have the opportunity to show three bands. Last year, I already made a band based on the Warming stripes by Ed Hawkins. In a plain weave, I was able to reproduce the warming stripes of The Netherlands for the period 1965 – 2000. So this one had to be on the exposition.

However, my other bands don’t have a clear message: they are ‘just for fun’. Submitting these bands together with the Warming stripes band would weaken the message and thus the only solution was to make two new bands within the theme Climate Change. A bit of Googling led me to a picture by Ed van Loon for the photo challenge “Dryness”. This could be cast in a double weave and after some struggles with patterning and the color of my weft thread, it worked out nicely!

For the third band the plan was to weave some windmills, also in a double weave. However, it seemed impossible to find a technique in which you can weave the three blades. So I had to come up with another idea and I only had four more weeks. Driving to one of my weaving friends, I passed a field of solar panels and I realised that solar panels are perfect for a tablet weave. Band number three was there!

I’m very excited about the result. And I hope that I’m able to raise some awareness about climate change by showing these bands, even if it’s just a little bit…

2 thoughts on “How to cope with climate change?”