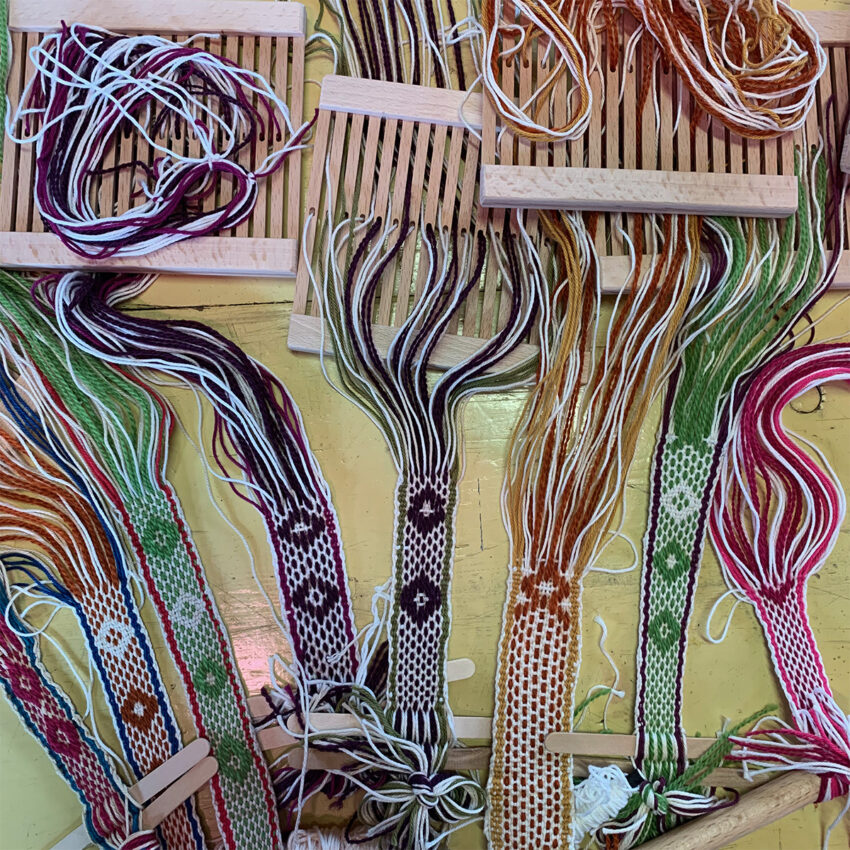 A long time ago I was called by Anneke Kersten if I wanted to be a teacher during Weaving International: a four-day weaving course for weavers from the Netherlands and Belgium. Each day had its own theme and Anneke asked me to give a workshop on Sami band weaving in the traditional way, i.e. with a rigid heddle loom.

Hmmm…. the rigid heddle and I don’t have a very good relationship. I’ve always told other weavers that I didn’t like weaving with rigid heddle very much, but in fact I kind of hated it. You have to go from a very wide warp to a very narrow band and it is difficult to keep a constant width. But contributing to a Sami day, including a lecture by Maaike Halbertsma, is a very nice experience. Time for the rigid heddle and me to work on our relationship.

Before I started preparing the workshop, I received a very precious gift. Freerk Wortman, a tablet weaver famous in and outside the Netherlands, was also an experienced band weaver using a rigid heddle. I felt very honoured when his widow gave me his unfinished weavings, “because they were in good hands with me”. And they were beautiful! If Freerk was able to make these kind of bands, I also should be able to use a rigid heddle loom.

So there was my challenge: finishing Freerk’s band. With this in mind I was preparing the workshop. My expectation was that I would have to make the warps for the participants, because otherwise there would be no time to weave. But threading turned out to be much simpler than expected: the participants should be able to do this themselves. I also discovered that weaving was much more fun than I thought; the results were quite good and I managed to get an even width.

The rigid heddle gained ground and especially since today’s workshop I can only say: the relationship therapy has helped! The rigid heddle and I became friends, because it was so nice to see how quickly everyone can start weaving with this kind of loom, how easy you can explain the threading and what results were achieved in a relatively short time. !

Ten happy students and a happy teacher at the end of the day and a workshop worth repeating. And my band weaving activities are not limited to workshops. Because this teacher will continue to practice on the narrow comb, so that she can finish Freerk’s band properly. A very special gift, which I can honor in this way.

Today I went to @studiohoptilburg with the first 6