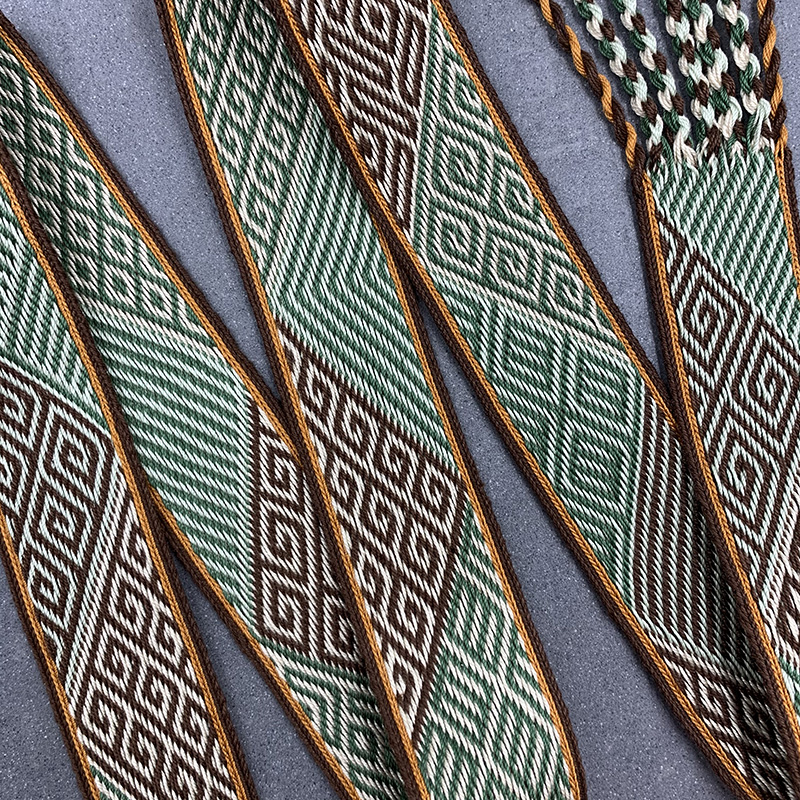 From 2015 to 2018 I joined “Zomervlechtschool” (Summer braiding week), where Marijke van Epen and Teatske Stouten tried to teach us all kind of simple and more complicated tablet weaving techniques. In 2018 Teatske tried to explain to me how to weave a 3/1 broken twill without looking at a pattern and with two empty holes. I didn’t understand much of it, maybe also due to the fact that it was 35 °C …

Eveline was also part of the group and she did understand. One year later we met at Marijke’s place and Eveline made a beautiful band in a 4 color 3/1 broken twill. Wow! I practiced a lot of Snartemo and was ready for my next attempt in twill weaving and certainly had to try this one. Eveline lend me her band and after one night of drawing the pattern I saw the light!

The next morning Marijke asked me if I managed to understand the technique. My answer was “Yes, I fully understand it! Twill is just like Snartemo but then in units of two.” Marijke and Teatske both looked puzzled and had to think about my Snartemo approach of twill, but finally both came to the conclusion that this indeed is a way to think about twill. So I started my own version of the “Eveline-band”.

After making about 10 triangles with different patterns, my loom ended up somewhere in a corner. I found it again when I was looking for UFO’s for the daily band practice and I had so much fun weaving this band again. Fifteen minutes a day sometimes became two hours a day and this weekend it came off the loom. And I still fully understand twill: it is just like Snartemo!

Passionate about inkle weaving, with and without tablets, and trying to do tapestry.

Finally some sense of summer in the Netherlands! T

Great to see these 10 different bands all using th

My selection of bands for the exposition in @museu

Too good to disappear after 24 hours… #doublefac

Warping day for my workshop on the Knit & Knot Ver

I still had to share this one: 6 meters long, 8 cm

Some kind of project... #doublefaced #tabletweavin